Dirty Trick of the Month: Liberty Mutual Denies a Short-Term and Long-Term Disability Claim Based on Multiple Medical Issues 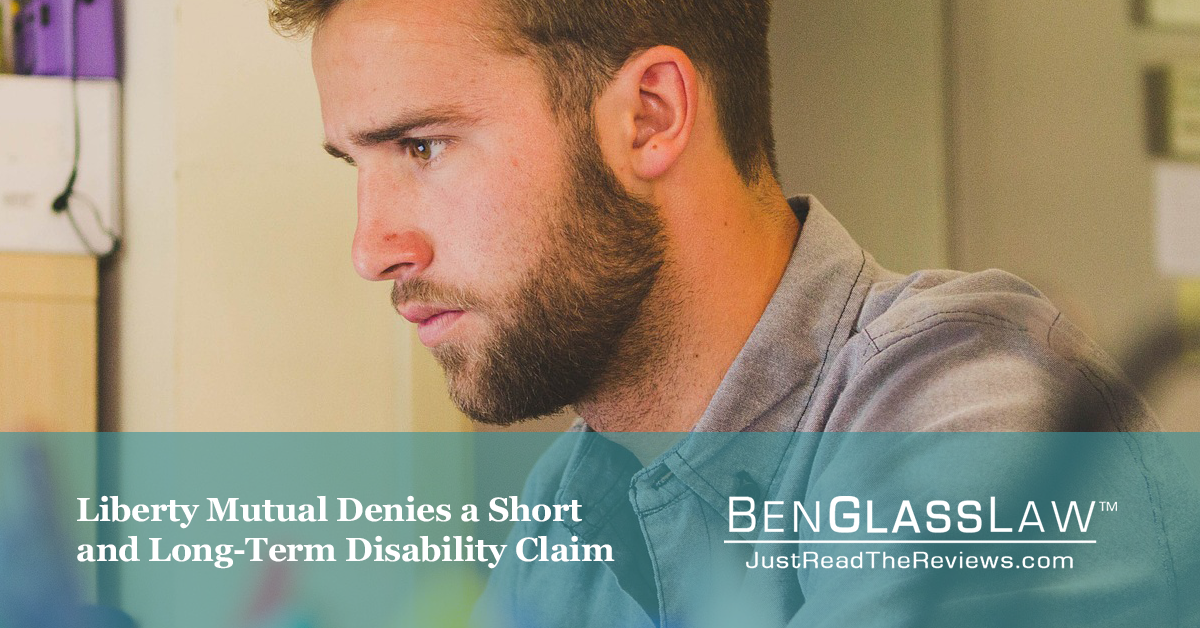 Here’s a cautionary tale from a recent BenGlassLaw client. Our client (we’ll call him Andre, which is not his real name) works for Facebook, which is real and about as cool a place to work as you would imagine. As you’d expect, Andre is a go-getter and highly proficient at his job. He was healthy except for a prior scare with Coronary Artery Disease (CAD) about 6 years earlier. Since then, he had been living life big, without any symptoms. Even though CAD didn’t affect his day to day life, Andre’s doctor recommended taking an over the counter aspirin anyway. No big deal, right? Lots of people get that recommendation. Thinking nothing of it, Andre took a daily aspirin as recommended. He had no idea that this simple act would greatly complicate his future disability claim.

Pretty much overnight, Andre’s health declined at an alarming rate. He tried to ignore symptoms of severe neck and back pain, fatigue, insomnia, chest pain, depression, and anxiety, hoping they would just go away as quickly as they had come. But after a couple months, Andre’s doctors recommended he stay home from work so they could focus on figuring out what was wrong. The diagnosis? A new coronary artery blockage (99% blocked) was detected, as well as a herniated disc and a small tumor.

So now he needed a new stent, and when he could safely stop taking blood thinners after that procedure, he needed back surgery and cancer treatment. If ever there were an easy disability claim to approve this should be it, right? (Spoiler alert: if the answer were “Right!” there would be no need for this article.)

Liberty Mutual was Andre’s short- and long-term disability insurance company, providing coverage through his employer, Facebook. Liberty Mutual denied Andre’s claim for benefits. They said that since he was taking aspirin, which, remember, was simply a recommendation from his doctor and of course is sold over-the-counter, his heart issue counted as a pre-existing condition.

Take a minute to let that sink in. The doctor recommends you take an aspirin a day. It’s just a suggestion, not a prescription, because some studies show that aspirin might help if you are pre-disposed to a heart condition (maybe). The insurance company then argues that means you lose your disability coverage for any heart-related condition.

What about Andre’s herniated disc and cancer diagnosis? Liberty Mutual tried to have their cake and eat it, too: they said that Andre was disabled, but it was due to his heart condition. Not the herniated disc. Not the cancer. No benefits were payable for those conditions. No consideration was given to the fact that he was a real person, who was dealing with not three isolated health conditions but with all of them at the same time.

How BenGlassLaw Helped to Reinstate Our Client's Disability Benefits

This is nonsense, of course. But it’s a good example of what disability insurance companies like Liberty Mutual will try to get away with. And they sound so sure of themselves in their denial letters. Before you accept what they tell you, though, let us take a look. We may be able to point out where the insurance company is making a fantastic leap that is not actually supported by the evidence or the law (no, taking aspirin does not mean you have a pre-existing heart condition. Yes, the insurance company DOES have to consider ALL of a person’s medical conditions and their impact on the Whole Person).

We filed an appeal for Andre and won (short-term and long-term disability benefits). We were able to recover over $60,000 in back benefits for Andre, and he is receiving a monthly benefit check of over $6,000. We are managing his claim to ensure he receives this money for as long as he remains disabled. We’ll appeal again if the claim is denied again. Because we don’t put anything past disability insurance companies like Liberty Mutual.