Why Was the Insured’s Accidental Death Insurance Claim Denied? 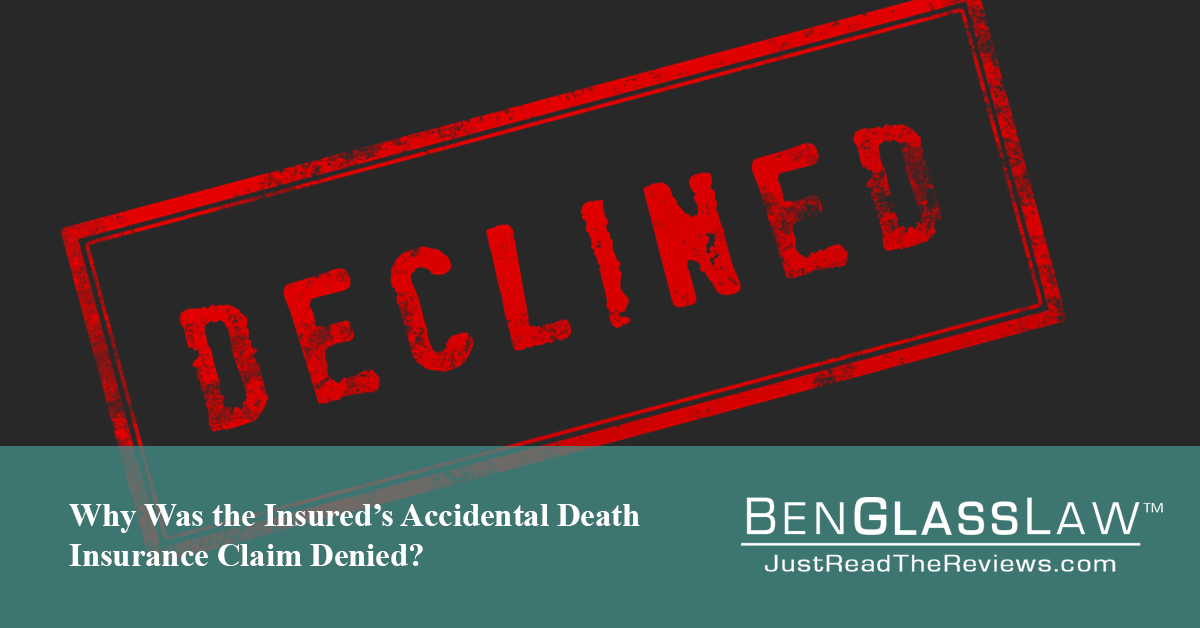 Accidental death claims are often denied by insurance companies because their idea of an accident often differs from most people’s perception of an accident (also, the last thing they want to do is make a payout).

If you feel that your AD&D claim was wrongly denied, then it may be in your best interests to reach out to an experienced life insurance claims attorney and seek guidance for your next options.

So why exactly are AD&D claims so difficult to get approved?

The Investigation Process: How Do Insurance Companies Investigate an AD&D Claim?

The purpose of an AD&D claim is to provide the insured’s beneficiary with a cash payment following the insured’s “accidental death” – this could be anything from a car accident to falling down.

Once the claim is filed, the insurance company’s claims department begins an investigation (this is standard practice for all accidental death claims). Their goal is to prove that the death was not an accident and had other contributing factors – remember, the insurance company does not want to make any pay outs.

The investigation will always start with looking at the certified death certificate and, if the person was hospitalized, the hospital treatment records. What are they looking for?

An excuse not to pay!

We won an appeal for the family of a man who died while kayaking on Lake Michigan. Yes, he brought beer with him on the kayak trip. The weather quickly and unexpectedly turned aggressive. And yes, the kayak capsized and tragically, he drowned. But the insurance company was wrong to deny benefits simply because he had been drinking. Do you know how many people drowned while kayaking on Lake Michigan who had NOT been drinking? Sadly, there have been many. The link that the insurance company (in this case, The Standard) assumed between drinking and drowning was a reach.

The Insurance Company Concluded Their Investigation, Why Did They Deny the Insured’s AD&D Claim?

So, it seems straight forward, right? As long as the insured’s death was not linked to the outlined exclusions, then the insurance company will definitely approve the claim (nope…sadly, this isn’t always true).

Here’s the most outrageous part. Most beneficiaries are surprised to see that even when the insured’s certified death certificate states that the cause of death was an accident, the insurance company will still try to play one last card: the decedent had a preexisting condition.

As soon as an accidental death claim is made, the investigator will immediately look through the medical records to try and link the death to a preexisting health problem – even if the insured did not know that one existed!

Their approach seems to be that if the beneficiary cannot disprove something, then how can they argue the decision? (this is how most accidental death benefit claims are denied).

Now you might be wondering, “are insurance companies really that heartless?” Think about it… insurance companies will obviously tell you that they never intend to deny valid accidental death claims, but let’s say the beneficiary is entitled to a million-dollar payout for a premium coverage of only eight dollars per month. If they were making these kinds of payouts regularly, they would be out of business – at the end of the day, its not personal, it’s just business.

If your accidental death claim was wrongly denied, we suggest reaching out to an experienced attorney to discuss your options and find out if you have a strong appeal argument.

If the insured’s claim has been denied, fax/email/mail us the denial letter as soon as you get it. We will review it and give you a detailed strategy for moving forward. This service is free, but you must act promptly. The insurance company only gives you a limited time to appeal or their decision is permanent.

We will evaluate your claim and let you know whether you need to hire an attorney, or whether you might be able to do this yourself.