What Happens if Cigna Denies My Disability Benefits Claim? 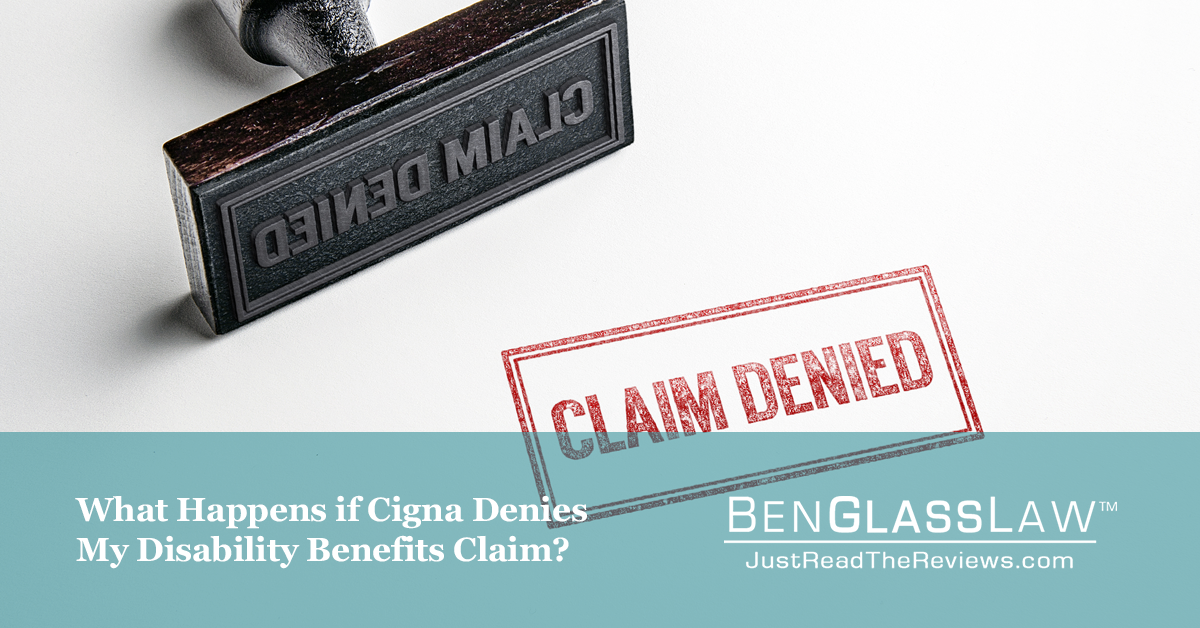 Who Denies the Most Long-Term Disability Claims? Cigna is the Leader of the Pack.

According to a recent study, from 2016 to 2018 alone, Cigna and its subsidiaries denied 2,539 disability claims. Prudential took a distant second place behind Cigna, denying 894 disability claims from 2016-2018. Cigna is far and away the leader of the disability claim denial pack. And, when Cigna sends a denial letter, we think Cigna does not always play by the rules. Courts across the country have decided that Cigna’s actions in disability claim cases have been flat out wrong. In the past 22 years, there have been at least 83 court cases criticizing Cigna’s behavior, and the majority of those cases (62 out of 83) were decided in the last 10 years. Is Cigna is getting worse? You be the judge.

Have You Received a Letter from Cigna Denying Your Disability Claim?

Have you received a letter from Cigna denying your disability claim? You are far from alone. We see denial letters from Cigna every day, and in most cases we can help.

Cigna is a very large insurance company. This company also goes by many different names, and the biggest one is the Life Insurance Company of North America (“LINA”). They handle thousands of claims like yours every day. Mistakes get made, sometimes honestly, but more often because Cigna claim reviewers move too quickly and skip important steps. Claims that should get paid get denied instead. And Cigna doesn’t seem to care – fewer claims paid means more profits for them. If a few people whose claims were wrongfully denied find a lawyer and appeal and get back on claim, the law says that, incredibly, all Cigna has to pay is what they should have paid you in the first place.

Bottom Line: It is cheaper for Cigna to deny benefits than it is to pay claimants like you what you deserve. No wonder we see so many outrageous claim denials.

What Should You Do if Your Disability Claim Was Denied by Cigna?

If Cigna has denied either your short-term or long-term disability claim, send us your denial letter for a free stragegy review.. This is extra important if your claim is under the Employee Retirement Income Security Act (ERISA). If your employer purchased the disability insurance policy from Cigna for you, then most likely your claim is an ERISA claim. And ERISA claims are tricky!

Under ERISA, by law, Cigna must follow certain rules. However, ERISA is very difficult to navigate and that makes it hard for YOU, the claimant, to know what the rules are. Of course, it’s hard to hold Cigna accountable if you don’t know the rules they are supposed to be playing by. And Cigna wants to keep it that way. Cigna will want you to believe that it’s easy to appeal your claim denial decision without an attorney. It may be easy (your Cigna claim manager will tell you that all you need to do is write “I appeal,” and your claim will be reviewed) but it is NOT smart. After you write “I appeal,” Cigna will simply write, “We reviewed our decision and we were right all along. Your claim is still denied.”

To protect yourself, you should talk to an attorney who has experience with ERISA before appealing any short-term or long-term disability denial by Cigna. At BenGlassLaw, we will review your denial letter and send you a written report for free. There is no reason not to get an attorney’s opinion about your denial.

Usually an appeal of Cigna’s denial of your ERISA disability claim starts like this:

IMPORTANT NOTE: DO NOT, under any circumstances, miss this 180-day window. If you do not file an appeal, your claim is dead. You cannot sue Cigna for denying your claim unless you first filed a timely appeal.

What Happens if Cigna Denies My Appeal?

If Cigna decides that they were correct in denying your benefits, then you have one last option. You can file a lawsuit in federal court.

You will absolutely want an attorney for this lawsuit as it can be difficult to overturn Cigna’s decision in court. Despite courts’ criticism of Cigna’s claim handling, the sad fact is that the law is written to favor insurance companies like Cigna. In fact, of cases that went to a judge to decide, insurance companies like Cigna won 7 out of every 10. Those are long odds!

The attorneys at BenGlassLaw know how to handle these lawsuits. Cigna will try to show that they were right in denying your benefits, but a federal judge will make the final decision. With our help, you can show the judge where Cigna abused its discretion to manage and decide your claim. That is the path to the closure – and benefits – you deserve.