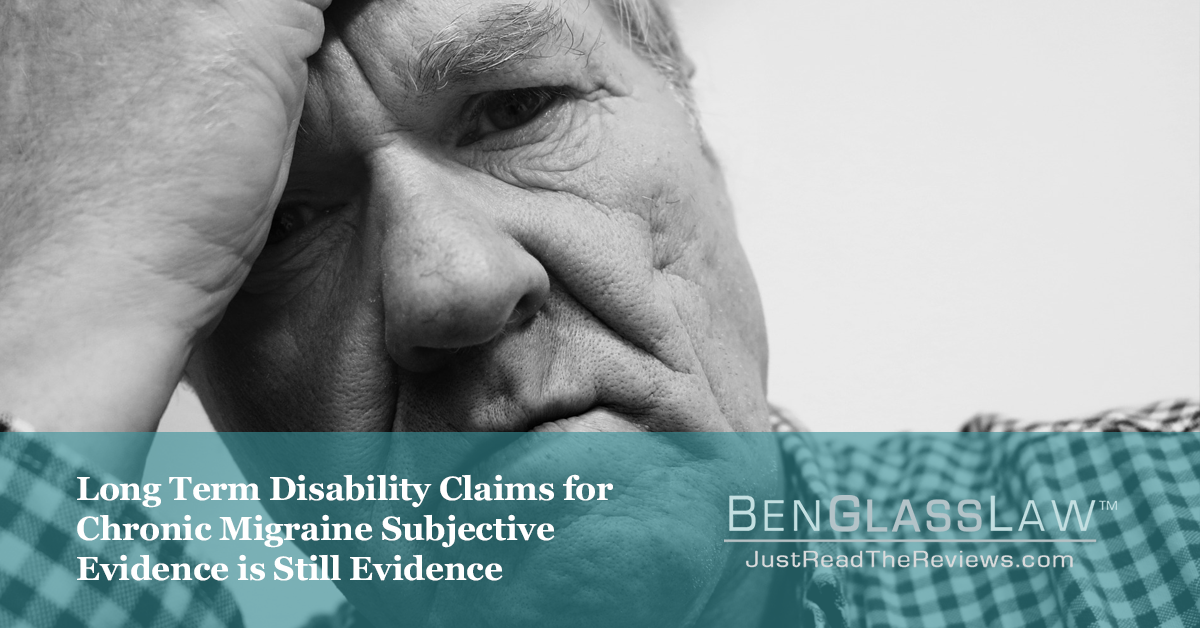 Disability insurance companies love quantifiable evidence. Denying claims which include subjective symptoms - evidence based on what the patient feels rather than objective testing such as CT scans, MRIs, etc. - is their bread and butter. This is exactly what happened to Donna, a hardworking Fairfax County Physical Education Teacher. She had a history of occasional migraines and spasmodic torticollis, an extremely painful condition where the neck involuntary jerks. For a long time her symptoms were manageable through a combination of treatment and sick days, but then her condition started to get progressively worse. Good days became increasingly rare. Eventually, she required multiple hospitalizations for her worsening symptoms. At that point, she knew that no matter how much she loved her job (which was a lot!) she could not continue working at the level her job required. Far more intense than a normal headache, migraines can be intolerable. In addition to excruciating pain, symptoms can include sensitivity to light, noise, or smells; nausea; vomiting; blurry vision; and difficulty concentrating. Migraines can come on suddenly and unpredictably, and last for a few hours to days…or more, as Donna was about to find out.

At the recommendation of her doctors, Donna stopped working so they could try to figure out what was causing her worsening symptoms. Donna was approved for Short Term Disability by her insurance carrier, Liberty Mutual. As the months went on, her doctors were no closer to finding an effective treatment. Donna’s migraine was labeled “intractable,” meaning it never stopped. She no longer had any headache-free days.

As the transition from Short Term Disability to Long Term Disability approached, Liberty Mutual reviewed Donna’s claim. There should have been no issue in transitioning to Long Term Disability benefits. There was plenty of evidence from Donna’s doctors to prove her continuing disability. And, in order for an insurance company to deny a claimant benefits, there must be a change in their condition. Denying benefits without proof of change is illegal. Donna’s condition had not been improving – if anything, it was getting worse despite all attempted treatment regimes.

Here’s where the problems began. Although supposedly independent, the doctor who reviewed Donna’s case was paid by Liberty Mutual, and he specialized in researching spinal cord injuries – not treating chronic migraines. In fact, as a researcher, he did not even see or treat patients on a regular basis. He only reviewed her paper records and never met Donna in person. After reviewing her files, his assessment of Donna basically said that since there was no objective evidence, she must be making everything up. Extensive documentation of her symptoms and failed treatments didn't matter. He was strictly looking for objective evidence, which he was not going to find, because such evidence does not exist in many migraine cases, including Donna’s. The reviewer stated that Donna was not disabled from a neurological standpoint, but he failed to consider the disabling effects of her chronic pain and other symptoms. As Donna received her denial letter for Long Term Disability benefits, she was shocked. She reached out for help in the appeal process to BenGlassLaw. A biased and unqualified review created the perfect recipe for Liberty to write their denial letter, but it also gave BenGlassLaw a great place to start an appeal.

Chronic migraine headaches fall under an umbrella of often denied long term disability claims. Why? Insurance companies put up a fight against paying benefits for these claims due to the subjective nature of the symptoms and the difficulty in proving what causes them. The cause of migraines is generally unknown, and there is usually no cure, only treatment to try to lessen the symptoms. But neurologists always need to rule out other causes of migraines (like a brain tumor). So initially, they do run lots of tests – all of which come back “normal.” That helps with the migraine diagnosis, but insurance companies always jump on these “normal” test results.  They say normal tests mean you are fine, or faking, when you and your doctors know differently.

Fortunately, most insurance policies and an extensive body of disability case law support the idea that disability can be caused by subjective symptoms. Appeals can be tricky, but it is possible to overturn a denial based on the insurance company’s willful dismissal of subjective symptoms. Just because your MRI is normal does not mean you are fine!

And subjective evidence is still evidence. We won this appeal, and Donna was approved for Long Term Disability benefits.