If You Think We Need "Tort Reform," Read This... 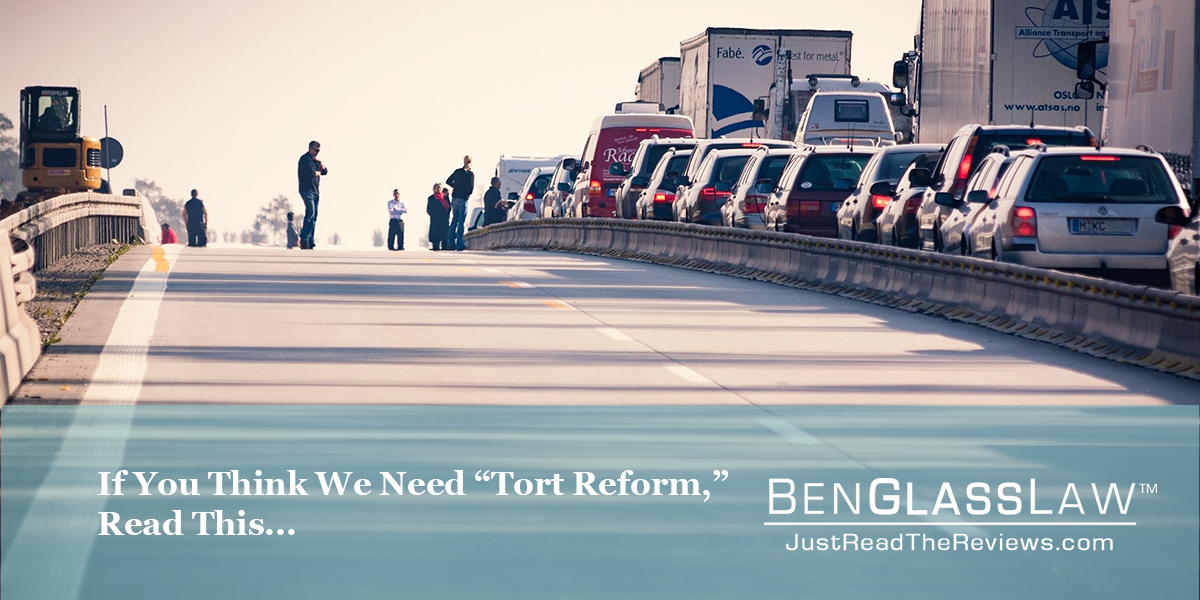 Time and time again, you hear the call "Tort Reform" the United States.  You hear of frivolous lawsuits and outrageous jury verdicts.  Well, let me tell you about tort reform in the context of one case here in Virginia and how the perceived need for tort reform is absolutely wrong.

Ever heard of "contributory negligence?" Most people haven't, and insurance companies only talk about it when they are trying to deny your claim.

Recently, we tried a case in Fairfax County in which our client suffered a traumatic brain injury due to a 29‑year-old running a red light and T‑boning him.  As it turns out, the reason the 29‑year-old ran the red light was because he wasn't paying attention and was playing on his cell phone.  Remarkably, despite this, at trial, the defense had the nerve to claim that our client committed"contributory negligence."

In Virginia, contributory negligence is a law that says if you contribute just one percent (1%) to your car accident claim, you lose and are barred from recovery.  Despite our client making a left turn with a green arrow, in open court, a defendant argued that he contributed to his own case, and the jury was left to decide.  Ultimately, they found in our favor, however there was a period of uncertainty in which our plaintiff could have gone with no compensation due to this awkward and archaic law in Virginia.

If you were injured in an accident, the insurance company will splash your medical records in front of a jury to claim that any symptoms you have are due to "pre-existing conditions." They will also bring doctors to support this argument.

At trial, however, the defense argued that our client's medical history which included complaints of memory loss and fatigue due to sleep apnea was really the reason that he couldn't go back to work and that he had suffered no head injury whatsoever due to the accident.  They then marched in multiple medical doctors whom they hired solely to testify at trial to say that he had no head injury.

The insurance company will also play games with the facts of your case.

In this case, the insurance company also had the nerve to claim that our client was actually still practicing law despite being injured.  In order to do this, they admitted into evidence a disability letter which was taken out of context, they argued that he received income after the accident which they didn't actually produce tax returns for, and they accused his law partner of committing criminal fraud because he still had him listed on the firm's website and paperwork with the state corporation commission.

In reality, the reason that the defense knew that it had strong footing in this case is the awkward nature of personal injury car accident cases in Virginia.  One of the biggest issues, is that the jury is never made aware of the fact that the 29‑year-old in this case actually had auto insurance to cover the claim, and our client also had substantial auto insurance that would have taken up any slack in a judgment award over the insurance that the defendant had.  Because Virginia law does not permit the introduction of auto insurance into personal injury cases, we were left with the optics of a successful attorney claiming that he lost a lot of money due to a 29‑year-old's negligence.  And the jury was forced to consider whether or not they should award an attorney a substantial amount of money against a 29‑year-old that had no apparent personal wealth that could have helped out to satisfy the judgment.  Essentially they were left with awarding a huge judgment against a kid and effectively pushing him into bankruptcy and ruining his life.

What about the "McDonald's Coffee Case?"  (Hint - you probably have been misinformed about that case, too.)

When you hear of advocates for tort reform, you never actually hear of issues such as this.  Rather they paint you a picture of oversized jury verdicts based upon little descriptions of actually the underlying facts to each case.  They don't tell you about Virginia's contributory negligence law or the law that prevents the introduction of auto insurance into car accident cases.  They don't tell you about the inherent biases against plaintiffs that every jury brings to the table.  They don't tell you the lengths at which defense attorneys will cut into the credibility of plaintiffs, pour through their medical records to look for any cause that they can blame for his or her injuries.  They don't emphasize the fact that they have endless dollars in order to invest in hired guns to come into court to testify against a plaintiff regarding his or her injuries.

They simply sell you the stories that make the Washington Post and New York Times that just give you one line sound bites.  It's unfair, and it disrespects our judicial system, one that's unique in the world that allows every individual access to the courts.  While of course not every case is perfect, and not every judgment is warranted, the judicial system is a human system that has inherent flaws that come with having humans control it.  To discount the system based upon tort reform lobbyists is unfair and doesn't truly consider all of the facts of the issue.

And just so you know, the McDonald's hot coffee case:  take some time to actually look up the facts of that case.  (And yes, I just linked a College Humor video to this article; sadly, it was appropriate because the coverage of this case is comical).  What happened in that case was truly horrific, however, the tort reform lobby has not provided you the full facts. (By the way, if that had happened in Virginia, the lady in that case may have lost due to Virginia's contributory negligence law).

If you have any questions about tort reform in Virginia or generally or you would like to comment, feel free to post a comment below or give us a call to discuss.  Of course if you need help with your own case, feel free to reach out.