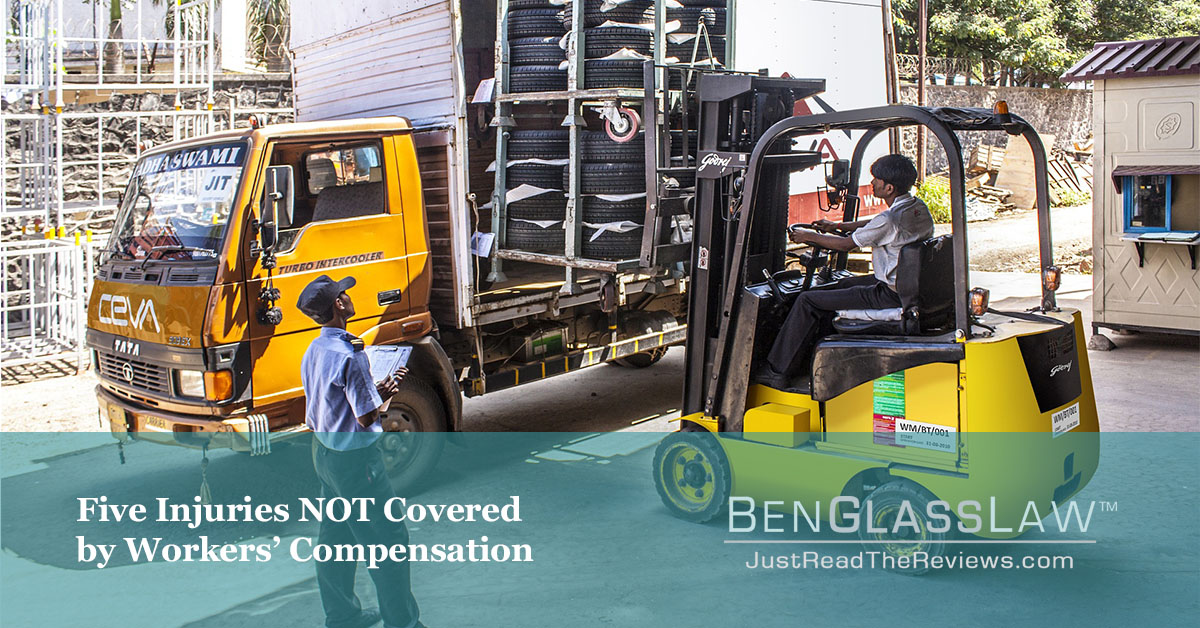 A common misconception held by those who suffer from an on-the-job injury that any injury sustained is eligible for workers' compensation benefits. However, this is untrue. In order to be eligible for benefits, the injured person must prove negligence or fault of the employer, which is not the case for all injuries.

Here are five common scenarios that are NOT eligible for workers' compensation.

Example: Being struck by lightning at work or performing a work-related task.

A natural disaster that cannot be avoided, like being struck by lightning or injured during an earthquake is equally likely to happen outside of work. An exception to this rule might be if another natural disaster is known about before it reaches you and the employer requires you to come to work despite severe weather warnings.

Example: A coworker runs over your foot with a forklift on purpose.

If a work event is hosted at a different location and is required, you may be eligible for workers' comp benefits if an injury occurs, even if it is the result of accidental horseplay. But, it is rare that an employer would make employees participate in an activity that could potentially cause an injury, like football, required. In many cases, these claims are denied because while the injured person felt obligated to participate, it was not required.

Another example would be if two coworkers would messing with one another and one person got injured, it is not covered. Similar to fighting, the purposeful actions of an individual is not at the fault of the employer.

Example: Getting rear-ended while driving to or from work.

Even though you are in the car because of work, this scenario is not eligible for workers' compensation benefits. Similarly, if you suffer from an injury while in the car on a break, it is not covered. However, if you are driving a company car or in the car to run a specific work errand, you may be eligible.

Be mindful and consult multiple attorneys before you pursue workers' compensation benefits because you cannot pursue both workers' comp and personal injury benefits. An experienced attorney will know which route will yield you the best results.

Psychological Injuries Without a Physical Injury

Example: Depression from bullying by coworkers.

A person can only receive workers’ compensation benefits from a psychological condition only if the worker suffered from a physical injury first. The doctor must state that the psychological condition was caused by physical injury. If you suffer from stress, anxiety, or depression because job-related conditions such as heavy workloads or conflict with management and other employees, it will not be covered.

PTSD may be covered if the person suffering from PTSD was not reasonably expected to be exposed to the triggering event in that line of work.