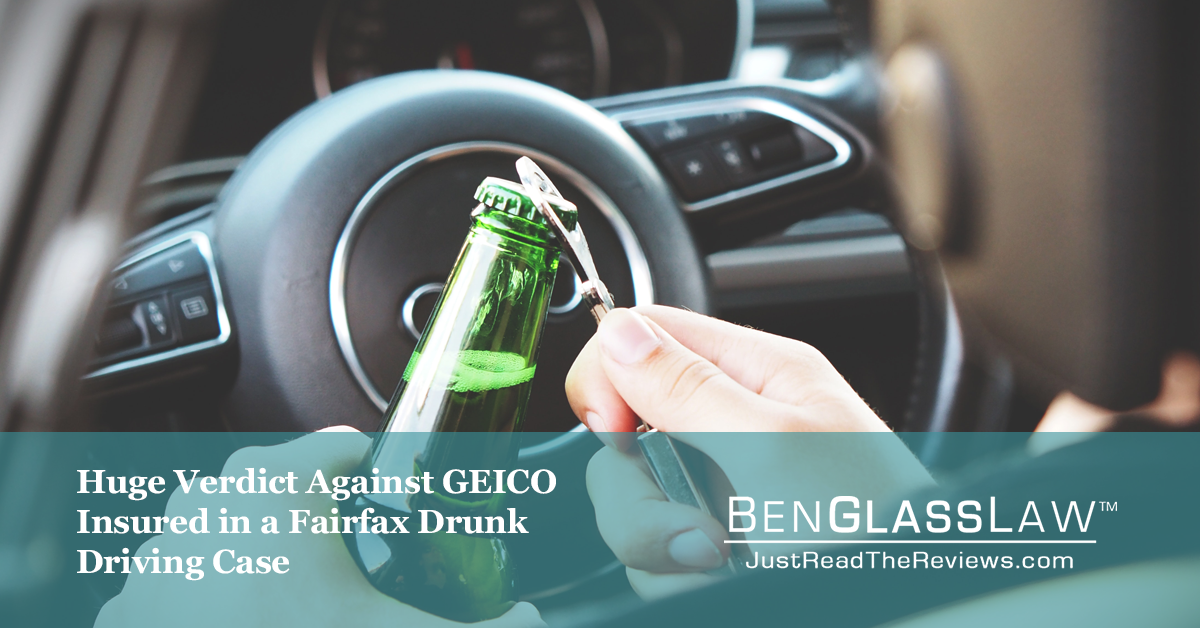 We expect insurance companies to behave rationally and make payments to people who are injured in auto accidents who have reasonable medical costs.  This is especially true when the driver who causes the crash is drunk.

In the case of Foley v. Walenius, tried to a jury in Fairfax County Circuit Court, GEICO did the exact opposite.  This case involved a claim for both compensatory and punitive damages.

Facts of the Case

In December 2017, the Defendant failed to yield a left turn to an oncoming vehicle at a green light because he "thought he could beat him."  When Fairfax County police arrived on the scene to investigate the crash, the Defendant was visibly intoxicated.  He vomited on himself during the traffic stop (which was caught on the officer's dashcam) and then several times during his transportation to the police station.  His blood alcohol concentration was found to be 0.15 mg/DL, or just about twice the legal limit.

He was convicted of DUI and received a suspended jail sentence, a suspended driver's license, and a fine of $250.  According to court records and unrelated to the injury case, the Defendant was also charged with possession of marijuana, which was dropped in the criminal court.

The Plaintiff in this case went to the ER for a hand laceration and then followed up with a chiropractor for a five-month acute treatment period.  He continued to see the chiropractor periodically for about six more months.  He incurred about $14,000 in medical costs.

Did GEICO Settle the Case?

Despite relatively minor medical costs, GEICO refused to settle the case with the Plaintiff.  Instead, they paid Dr. Ian Wattenmaker, an orthopedist from Prince William to come to trial and testify that only $4,000 of the Plaintiff's medical costs were reasonable and that he did not, in fact, need much chiropractic care after being hit by a drunk driver.

What Was the Verdict?

The jury in Fairfax County awarded the Plaintiff $34,000 in compensatory damages and $200,000 in punitive damages.

It is not clear why GEICO decided to pay a doctor $13,000 to testify that $10,000 of the bills were not related to the crash.  The sheer economics of that don't make any sense.  The jury was upset by the Defendant's behavior and likely by the lengths that the insurance company went to avoid paying the Plaintiff.

The Plaintiff's lawyers at trial were Brody Reid and Howard Ackerman, who are not affiliated with Ben Glass Law.  We commend them for their efforts in bringing justice for their clients.