Did You Sign a Fee Agreement With an Attorney Who Refuses to Go to Court?

The Importance of Understanding a Fee Agreement

Have you ever signed a lease agreement for an apartment or agreed to the terms of a credit card for a store like Best Buy or Walmart? The first thing you probably did was check for any of that small font that has the sketchy “gotcha” that offsets that “great deal” they are offering, right?

A fee agreement is no different. It’s understandable to assume that you have nothing to worry about since you’re signing a contract with an attorney, but that is not always true.

Just like that “great deal” for a store credit card, a fee agreement can also contain hidden “gotchas.” The “gotcha” we see most often is when a client signs a fee agreement that states the attorney will “never go to court.”

You may be wondering if your situation could have been avoided.  Our answer is, “probably, but we don’t blame you.” It can be tough to read over a contract that contains terminology you may not understand. Plus, you’re not a lawyer! You didn’t spend three years in law school and a summer studying to take the bar exam!

It should be noted that attorneys often have, “if we choose, we won’t bring your case to court” in their retainer because sometimes they will discover things after accepting a case that leads them to believe it won’t be successful.  That generic ‘out clause’ is fine. It’s the, “I never go to court,” clause that you should look out for!

You may have looked right at the section in your fee agreement that said, “I never go to court,” but it wasn’t written clearly in black and white.

This is why we say time and time again to look over every single word carefully and ask questions whenever you are unsure of anything. Do not sign until you are 100% sure that the attorney in front of you is going to try your case to the best of their ability.

What Are Your Options If Your Attorney Violated the Fee Agreement?

You have gone back and looked over and broken down every single word in your fee agreement and there is nothing that says your attorney can openly refuse to take your case to court. So, what now?

Luckily, there are some options that you can pursue whether you feel that your attorney just isn’t the right fit, or your attorney has broken your agreement and ruined the integrity of your case.

If you feel that your attorney is not including you in the process of your case or in this instance, refuses to pursue your wishes of moving your case into court, then you have the right to fire your attorney and hire a new one. Clients often do not realize they can fire their attorney anytime if their case is not pending in court.

However, we should note that there are some things to know about firing an attorney and most of it goes back to the fee agreement you signed with them.

If you plan on firing your attorney, make sure it is the best decision for you because it can become very costly. Stated in almost every fee agreement, “should the client decide to terminate their contract with the attorney, the a 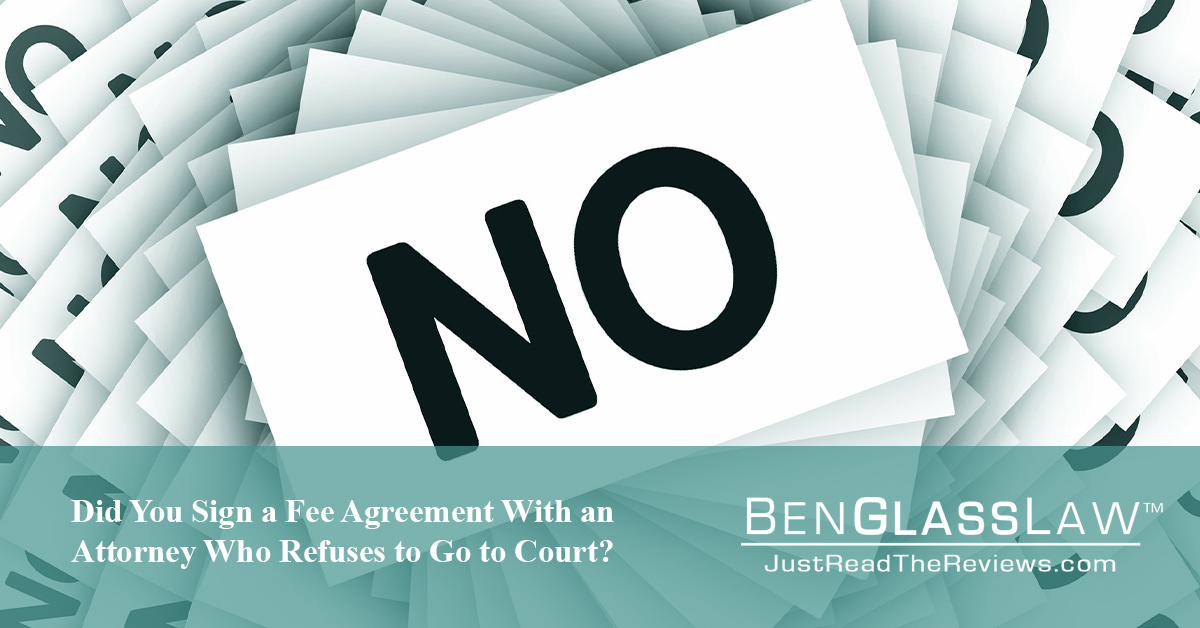 ttorney must be paid for all legal services up until the point of termination.” After you pay the attorney for their work up to that point, then you will need to hire a new attorney which is another fee you will have to pay.

If you do choose to fire your attorney, you should send them a letter that states you are terminating the contract and make sure to request all your files or have them sent to your new attorney. You are entitled to all the work you and your former attorney did up until that point.

Sue Your Attorney for Malpractice

Recently, we saw a legal malpractice case where a client signed a fee agreement with an attorney who they assumed would handle their case correctly. Unfortunately, the attorney made a crucial error that would derail the entire case.

Example of a Malpractice Case

and could not be held responsible for the actions of the driver. Because of this blunder, the entire case was derailed and ruined.

With no other choice, the client fired their attorney, retained a new one, and sued the attorney for malpractice.

How to File a Complaint Against Your Attorney

To win a malpractice case, you must prove three things:

If your original case is still pending, then you should take steps to ensure that your case is properly handled before moving to file the complaint against the lawyer. This includes retaining a new attorney to continue your case.

It is a very serious matter if you feel as though your attorney is acting unethically. However, it is extremely important to understand that this happens in very RARE occasions. Attorneys have your best interests in account and will lead you down the correct path 99.9% of the time. We cannot stress this enough. Attorneys work hard to protect the rights of their client, so you should not feel afraid to trust an attorney with your case. Before you hire a lawyer, make sure to carefully look over the agreement before signing to make sure the attorney is the correct fit for your case.  Ben Glass Law has several publications on how to hire the best lawyer for your case.

You may not need a lawyer for your small car accident case. If you are a Virginia resident, you can download a copy of my FREE book GetItSettled from my website. If you want to contact BenGlassLaw about your case, call (703) 584-7277 to speak to one of our trained staff members.