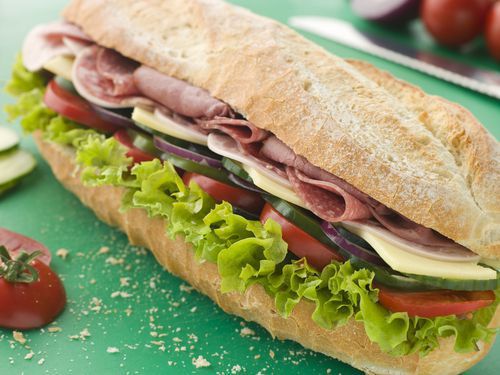 How to get massive publicity for your law firm. File a stupid class action lawsuit.

Suit has been brought in New Jersey (big surprise) by a lawyer and a couple of clients claiming that Subway advertises "foot long" sandwhiches but they a'int 12 inches long.

So, instead of ASKING FOR THEIR MONEY BACK they bring a class action lawsuit, claiming to represent all of the Subway customers who have been "shorted."

Huh? Is this really the way we settle disputes like this in the country? Some other real victim of something just got their case pushed back because these clowns have nothing better to do.

By and large class action law suits slow growth, suck money out of businesses and the economy as a whole. Yes, sure, there are cases where people have suffered real harm and cases ought to be brought together for the judicial and societal economy.

But that's the exception.

In most class action lawsuits a bunch of lawyers have gotten together to conjure up something, hoping to score a few million in attorney fees while their "clients" get coupons.

I'm sure this blog post will draw the ire of some lawyers. Really? Defend this one?

One more thing. Subway is not innocent in the lawsuit "game." Here they threatened to sue a hot dog vendor because they claimed the absolute right to the term "footlong".

by Ben Glass [email protected]
Connect with me
Ben Glass is a nationally recognized Virginia injury, medical malpractice, and long-term disability attorney
1 Comments
I agree 100% that this is one of the silliest class actions out there. It is wrong on many different levels. One being that it takes away consumer responsibility at the market level by not allowing the market to decide, and overcrowding an already crowded system with folks who are truly injured. Money and news worthiness can only be the true motivating factors here. Great post!
by Mark Blane March 17, 2013 at 05:44 PM
Post a Comment