Please Don't Post About Your Car Accident on Social Media! The Insurance Company Is Watching 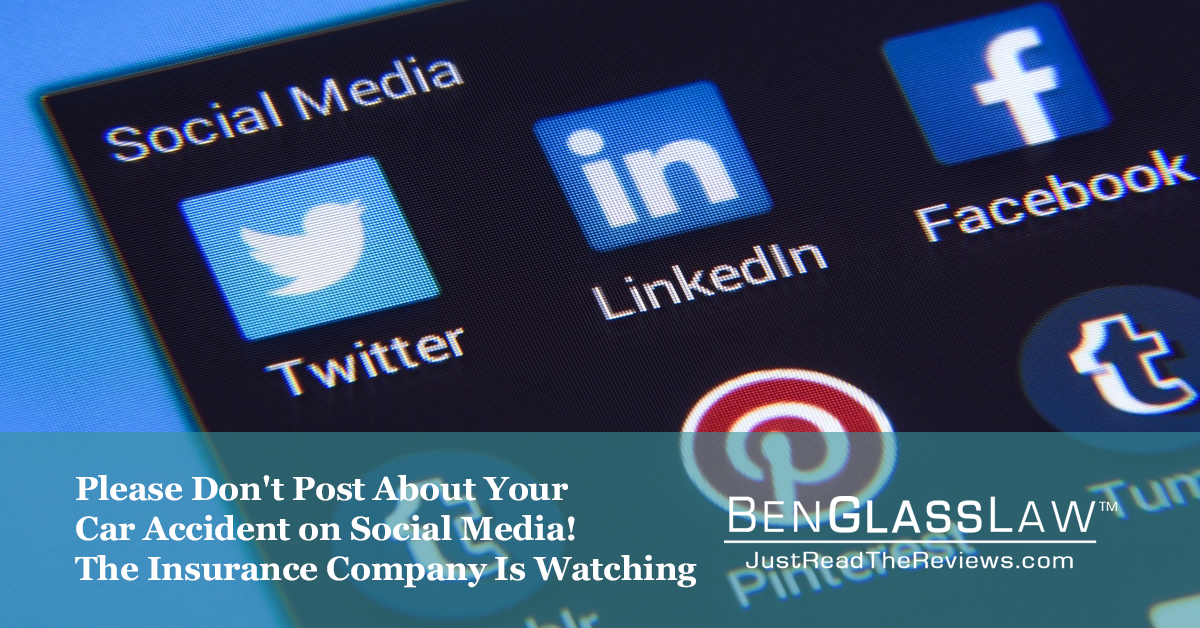 I'm the first to admit it; I love social media.  I'm an active user of Facebook and Twitter (follow me @JamesAbrenio).   These platforms are keeping me in touch with friends and family.  They help me sort through the important news of the day.  And they distract me from the boredom of waiting in line for coffee at Starbucks. (Yes, it's true - millennials have an attention span of a goldfish, if I still count as a millennial, anyway).

But I also hold no illusion that what I post won't be seen by everyone.  And if I get in a car accident, I'm also aware that insurance companies, defense attorneys, and probably the person that injured me will be scouring my profiles to prove that I couldn't have been hurt because I posted about Keanu Reeve's hilarious new role on the Netflix movie, "Always be my Maybe." (Seriously, it's awesome...check it out).

Insurance Companies Are Open About It - They Monitor Your Social Media Accounts, Both Before and After Your Accident.

If you've been in an accident, and file a claim, I can't guarantee I can win your case.  But I can guarantee that the insurance company has Google'd you and seen all of your social media accounts.  If you haven't already, type your name in Google.  Unless you're a celebrity (or don't have social media), your accounts will be close to the top of the search results, for the world to see.

Now think about how much information that social media provides the insurance company about you. Including your hobbies, your friends and families, the sports and movies you like, how active you are, your politics, etc.  Our social media is a living, breathing file of our lives.

What's My Social Media Got to Do with My Car Accident Case?

First of all, remarkably, people will post pictures and descriptions of what happened in their car accident.  How it happened, where it happened, how badly they were hurt, what they did following the accident.  All of that is essentially a free deposition for an insurance company.  And believe me, they won't view it in a real-world lens of empathy.  Rather, they will focus on every good fact for them, and bad fact for you-you were able to get out of your car, you had the cognitive ability to not only take pictures but then upload them to Facebook.  You obviously felt good enough after the accident to even use Facebook!

If You're Claiming Serious Injury, Social Media Is A Gold Mine for The Insurance Company.

If you've tragically been seriously injured in a car accident, you likely are claiming long term debilitations, you can't walk properly or you have limited motion.  You may be claiming a long-term brain injury and have issues with light sensitivity, thinking, enjoying life.

Well if you're a social media user, the insurance company will review your social media life, both before and after the accident.  And anything you do after the accident, they will try to shape as evidence that you can't really be injured.  Sick and tired of just laying in bed all day because it hurts so much so you decide to grab a beer with a friend, and your buddy takes a quick pick to celebrate that you were able to get out in public if even just a moment.  If that's on Facebook, the insurance company will use it to say you couldn't really be injured.

Your family decides it's best to take you on the family vacation.  Inevitably, photos are taken and posted.  Same argument - how could you possibly go to a lake if you claim permanent injury?!

What Can I Do? Social Media Is A Big Part of My Life

I get it. I, too, would have a hard time not using it.  But if you've been in an accident, you have to realize that you're under the microscope.  So be smart. Keep your thoughts and pictures to yourself.  Because even innocuous posts can possibly be shaped against you.  It's the same reason I tell my criminal clients to not speak to law enforcement - because even statements that seem to prove innocence will be twisted against them.  Better to just keep your mouth shut and call me.

Recently, I learned of a case where an individual was claiming a serious traumatic brain injury that was allegedly debilitating, only for the defense attorney to find a video posted to social media where that person was clearly involved in activities that proved he was lying.  In cases like this, I have no remorse for that claimant.  Making false injury claims is abhorrent, it's insurance fraud, and if I ever found something like this in one of my cases, I'd fire my client immediately.

There are people truly injured due to others negligence.  And when people try to "fake" an injury, they insult all of those truly injured.  This is not a game.  The clients I represent have faced devastating consequences and would gladly return any money they've received to be able to have avoided their accident.

by Brian Glass [email protected]
Virginia personal injury lawyer selected to SuperLawyers Rising Stars List and the NTLA's Top 40 Under 40.
1 Comments
It never would occur to me to do this! Now that I've read your post it set me thinking: How many people have done this or would do it? Seriously! Even a great attorney could have trouble dealing this the mother load of TMI. Thanks!
by Trish February 27, 2020 at 10:39 PM
Post a Comment