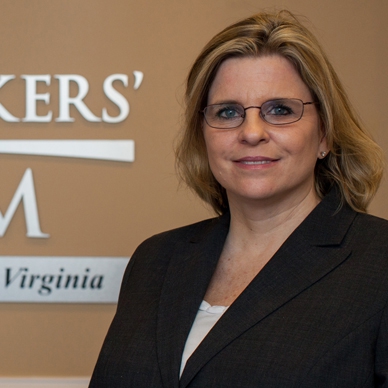 Michele Lewane has been representing injured workers since 1989.  Michele is the lead attorney and founder of the Injured Workers Law Firm located in Richmond Virginia.  She limits her practice to workers’ compensation for the injured only.  She is the author of the book, Ultimate Guide to Workers’ Compensation in Virginia, Everything You Need To Know If You’ve Been Hurt On The Job. Michele has made it available for Free to anyone who is hurt or requests it. Michele is truly an advocate to making certain every injured worker knows their rights in Virginia.

After completing her undergraduate degree at the University of Virginia, she graduated 3rd in her class from the University of Richmond, T.C. Williams School of Law in 1989.  Immediately following law school, she clerked for the State Court of Appeals, gaining extensive experience and insight into workers’ compensation matters by researching and drafting opinions on the technical aspects of this area of law.  She had a general law practice with Hubbard, Samuels and Lewane from 1990 to 2007. In 2007, she created Injured Workers Law Firm to help injured workers exclusively with their workers’ compensation needs across the state of Virginia.

Michele is Co-Founder and Vice President of Kids’ Chance of Virginia (KCVA) who are proud to provide post-secondary and trade school scholarships to the children of Virginia workers who have been severely or fatally injured in a workplace accident in Virginia.

Michele and her husband Bob live in Henrico County and have four children with whom they enjoy spending time with on the river or at the beach.